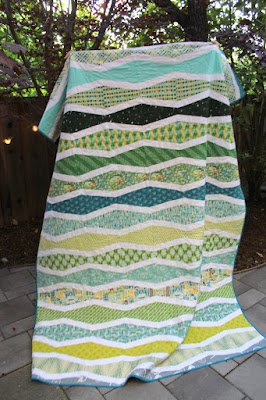 Quilting really isn't my thing; I've made a handful of quilts over the years and while I have been really proud of the resulting blankets, it's not something I enjoy very much.  So, clearly, making a new dress or blouse has taken priority over a long-term quilting project!
Truthfully, I had intended to make a quilt for my younger son when he moved into a "big boy" bed. But that was about 4 years ago.... However, with an impending long trip away from my kids, there was an impetus to get that project off the queue.  Finally buckled down and got it done!  Phew! 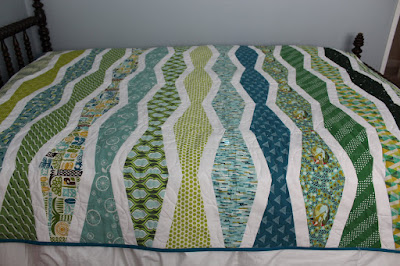 The pattern I used was "New Wave" by Elizabeth Hartman.  Such a simple, modern and beautiful design!  I can imagine it in tonal solids for an adult bed.  But for this one, I chose 19 different prints (over the years I've swapped some out as I've found new and exciting prints) that had a similar color scheme to the quilt I made for my older son. 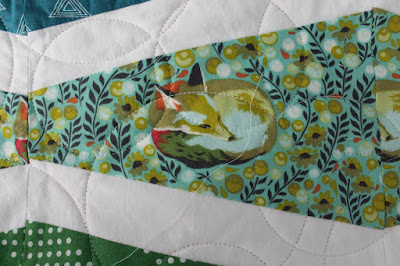 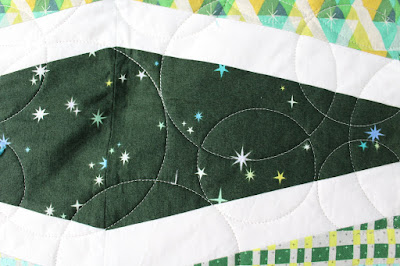 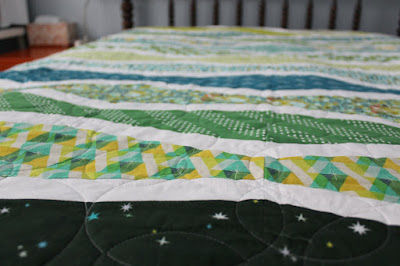 Since the blocks are trapezoidal, cutting was not quick!  Then there was the perpetual fear of stretching along the near-bias of the slanted edges, so sewing was not the quickest, either.  It was also not trivial to line up all those diagonal lines!  However, the result is totally worth it.  Love! 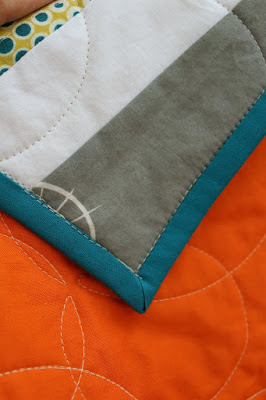 Since the only thing worse than sewing the quilt piece together is the actual quilting part, I "subcontracted" that part out! Local long arm quilter, Melodee Wade, who also quilted my older son's quilt, did the work.  She does a beautiful job and in hardly any time at all!   She also trims the edges so all I had to do was apply the binding--pretty awesome.
Melodee suggested the "bubbles" design for the quilt, which nicely complemented some of the wheels and other circles in the prints. 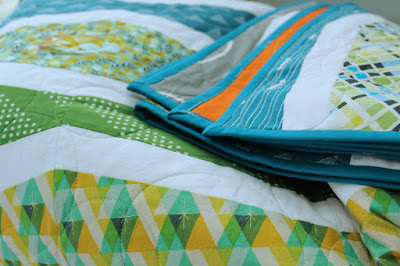 The edges are finished with handmade binding, with mitered corners. 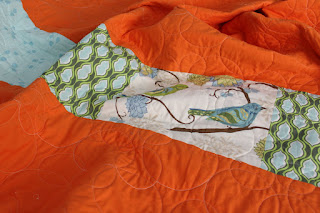 The back is a solid orange color, with a strip of fabrics from my son's original baby bedding that I made when he was an infant. 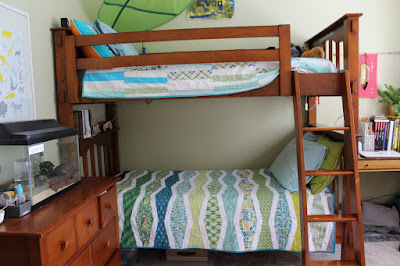 Here's the photo of the two mom-made quilts together.  The idea was to have them coordinating but not identical.  My older son's (on the top) is a Denyse Schmidt design from her book, made about 7 years ago (before this blog).  It's shocking how much wear it is showing already, and that makes me sad.  Some of the blocks are ripping and the whole thing is very faded.  Honestly, we don't wash it that often, but clearly this isn't going to be an heirloom!  Below is a close-up of some of the worst blocks, how the quilt looks on his upper bunk, and finally what the quilt looked like originally (on Melodee's long arm machine): 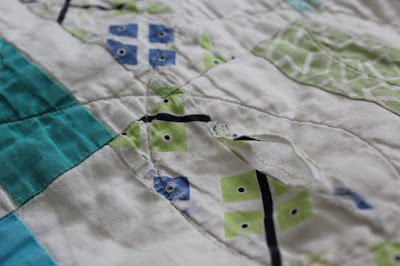 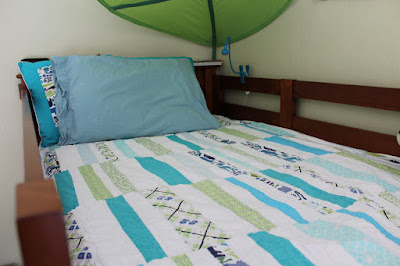 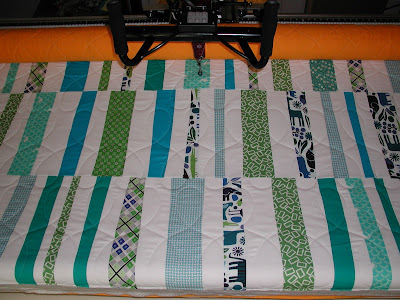 C'est la vie, I guess.  Perhaps I'll be making replacements for these in the next few years! 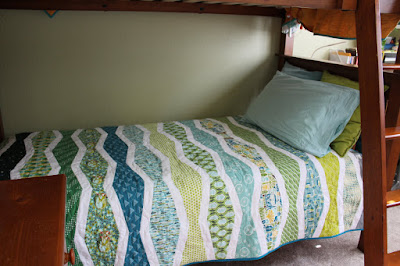 It's such a nice feeling having this project done...now now back to clothing!