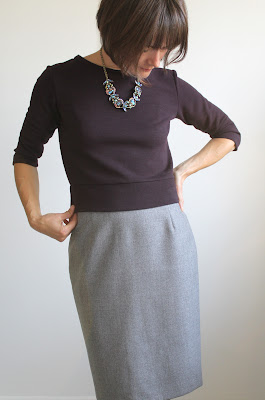 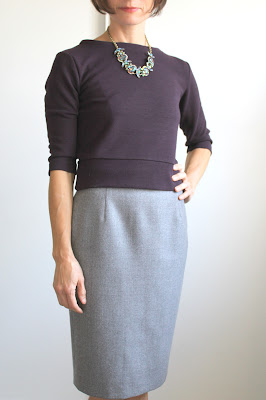 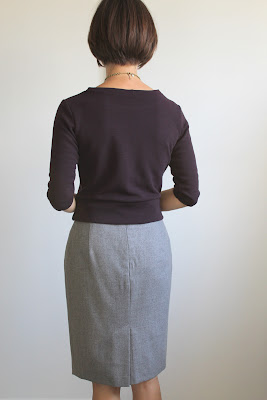 I had to make some fit adjustments to the original pattern, but this skirt is the same pattern I drafted in my patternmaking class several years ago.  It's such a great design and fabulous wardrobe staple.  See, high-waisted = covers my belly button! 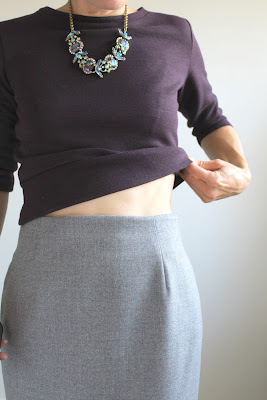 A few weeks ago, I went to the "Artistry in Fashion" event at Cañada College (where I'm currently taking a pants drafting and fitting course).  Britex had a small booth there with some discounted remnants, so I scooped up this luxurious Italian wool fabric.  There was only 2/3 of a yard, but with my lack of height, I knew I could eek out a skirt.  And I did, with some inches to spare! 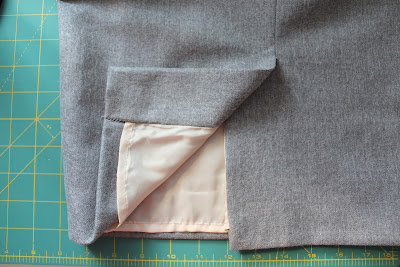 The inside has a self-facing and is fully lined (Bemberg rayon, in the most lovely pale blush color) and there's a back vent (which is completely necessary for walking!). 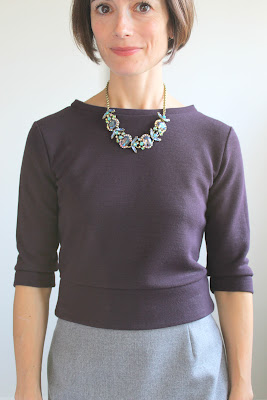 I used the tried and true Astoria top from Seamworks (with personal fit modifications) for the top pattern.  It's so versatile and comfortable.  Here's the top with a swishy skirt and it works just as well. 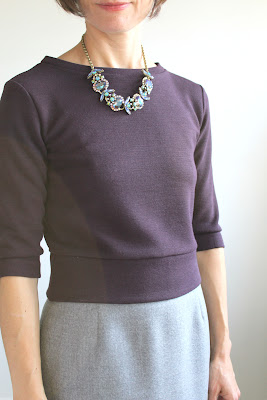 For the top, I had a gorgeous plum stretch wool-rayon double knit from Mood.  It's pretty thick with not much stretch, but it's perfect for this type of "sweater" top.  The high-waisted, wide band really works with this skirt, I think.  And there's enough coverage for me to raise my arms (within reason) and not show too much skin. 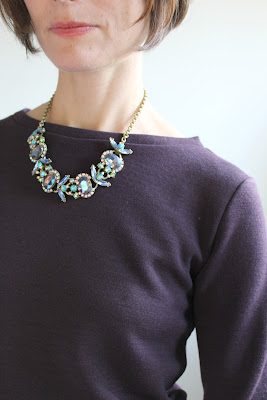 Since the fabric has very little stretch, the neckline stands up a bit, but I think it gives a bit of a vintage vibe to the garment. 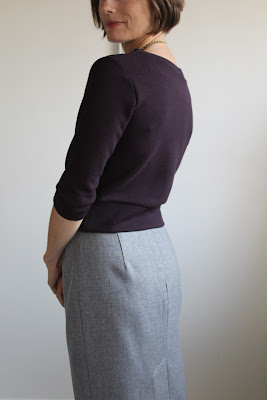 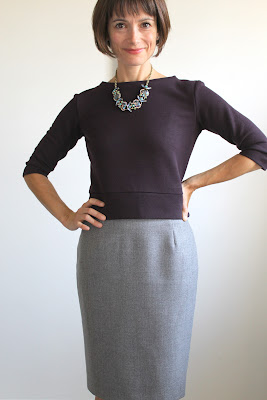 I've already got fabric for three more skirts lined up and a couple more tops.  I'm clearly very excited about my new uniform!

Nettie bodysuit for the Fall 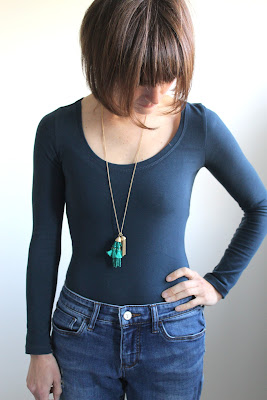 I've sewn a bunch of garments since returning from my Paris trip--three dresses, a few tops, a skirt, prototype pants for my class--but I just haven't had a chance to document most of them.  So, this bodysuit here isn't a rare finished project, it's just one of the few I've actually taken photos of!  Actually, I tried it on after finishing to make sure the final product looked good and just went ahead and set up my tripod for the pics.  Efficiency! 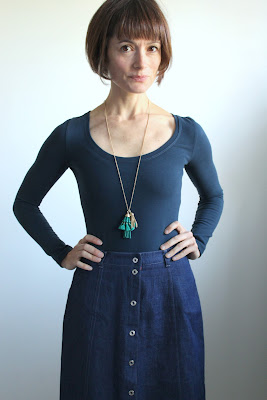 I have a couple of garments that I was having trouble finding tops to go with--a high waisted skirt that I made as a tester for Blank Slate (above) and a few cute wrap skirts (here and here).  It occurred to me that a bodysuit would go well with both types of skirts.  So I bought one.  And while it's super adorable and awesome, it wasn't cheap and I had to employ my sewing machine to alter the crotch depth anyhow.  I've made bathing suits, so it was sheer laziness that caused me to take so long to just buy a pattern and sew a darn bodysuit.  (Which is lazy unto itself because I've actually drafted a bodysuit pattern in my past and I just didn't feel like sizing it down.) 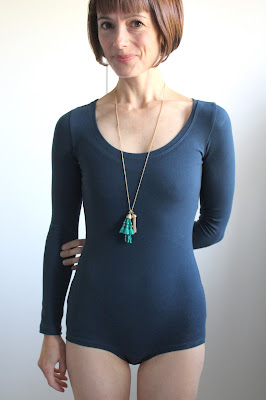 Anyhow, laziness aside, I bought the Nettie bodysuit pattern and cut out the size 2, grading down to 0 at the hips.  I quickly realized that the back pattern piece would be way too narrow for my broad back and redrafted the back pattern to add width at the armholes and center back (about 2.5 inches at the widest point!).  I'm so happy I did because the original version would have been uncomfortably tight. 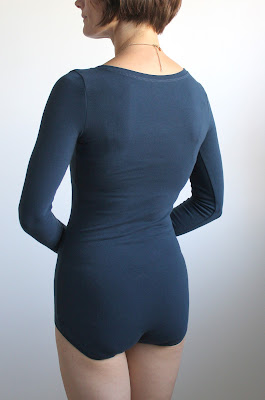 Actually, the entire bodysuit is a bit tight.  It could be my fabric choice, which is stretchy, but not SUPER stretchy.  I may try with a different fabric, but sizing up wouldn't hurt either.  It's absolutely wearable as is, so I'm not too upset about it. 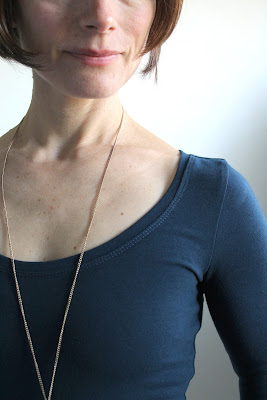 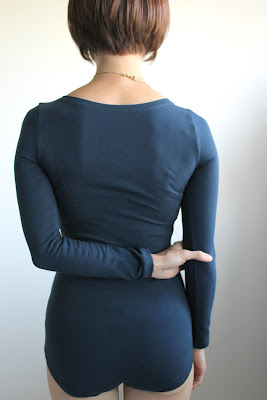 There are a variety of options for the front and back necklines, but the low front was too low and the high too high for me.  I drafted my own Goldilocks neckline :)  It looks graceful but not too revealing. 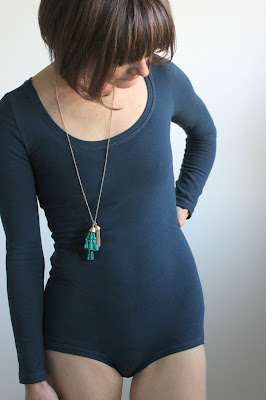 I love the low leg holes.  They're the best!  My butt is covered!  I used three snaps for the crotch, not at all following the instructions (and cutting off about 2" on the crotch length).  The best part about sewing bodysuits (or bathing suits or underwear) is being able to stretch the ribbing or elastic where you want it.  I always pull it a little tighter in the part that's going under my butt and less tight near the hips and crotch. 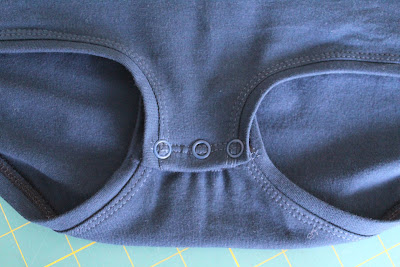 Overall, I'm pretty thrilled with my bodysuit.  I can imagine wearing it a lot this fall, under a wrap sweater like this: 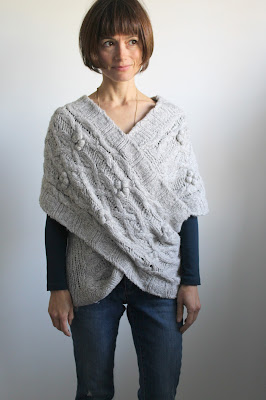 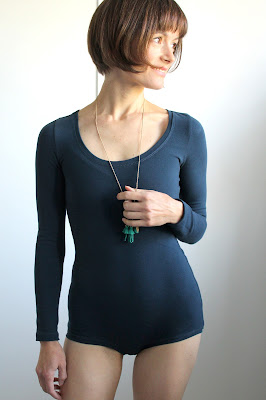