Pizza is a weekly occurrence at our place, usually on Friday (like everyone else, right?)  Every week, I have the same dilemma--the pizza crust recipe makes two rounds and we only eat one.  Sometimes I freeze the uncooked ball of dough, sometimes I par-cook the crust and put in the freezer, sometimes it's baked with olive oil as flatbread, but sometimes *gasp* it gets thrown out.  I know, why not just halve the recipe?  (Answer: the dough is difficult to work when there is such a tiny ball.)  My other dilemma is that the sauce I use (a tiny can of Hunts tomato sauce) is also unfinished.  Sometimes we find other uses for it, or it can last until the next week, but it often suffers the fate of other leftovers and gets tossed after it's refrigerator life has expired.

I don't know why it has taken me so long to try this out, but the a few weeks ago, I decided to make up the pizza as if I were going to bake it and then (wait for it!) FREEZE the whole thing!  I always par-cook the crust before adding the toppings anyway, so the crust was already mostly baked and cooled by the time I had my epiphany.  I sauced it, slapped on some pepperoni and then put the cheese on top.  Fearing cheese and sauce stuck to the foil wrapping, I cut a round of waxed paper to fit and then wrapped the whole thing in two layers of foil. 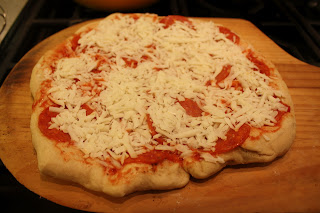 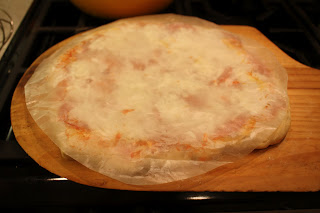 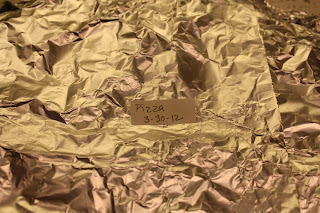 To cook the frozen pizza, I heated the oven to the usual 475F and placed the unwrapped frozen pizza on the pizza stone.  It turned out incredible!  Perhaps he was just being nice, but my husband said he thought it might even have been better than the original.  I don't know about that, but at the very least it takes the work out of pizza night every other week! 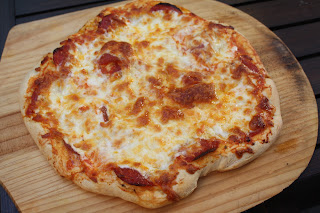 Nope, this isn't the same pizza--I've done this magic trick a couple of times now :)