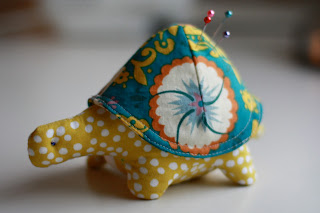 I could not resist this pin cushion pattern from Heather Bailey.  Truly, the price was a bit high at my local boutique fabric store, but I bought it anyway--it's that cute.  In an ongoing effort to reduce my fabric stash, I used what I had on had: some leftover Lotta Jansdotter "Bella" dotted yellow for the body (and the stripe for the belly) and Anna Maria Horner "Good Folks" for the shell.  Instead of French knots for the eyes, I used tiny seed beads since I had them on hand.

This was a rare instance when I sewed the entire thing during the day (as opposed to after the kids' bedtime).  I cut the fabric while the little one was playing with trains, and did the majority of the sewing during a single naptime and a bit of cooperative playtime between my two boys (when they were setting up a tea party outside my sewing room :). Three cheers for a quick, adorable and useful sewing project! 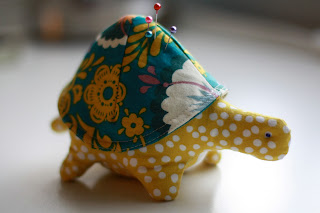 Now, hopefully I can get over the feeling that I'm using him as a voodoo doll when I poke him with pins (you know, use him as intended...) 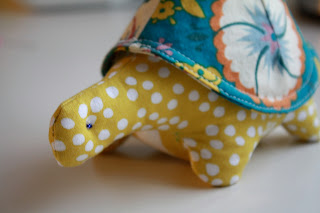