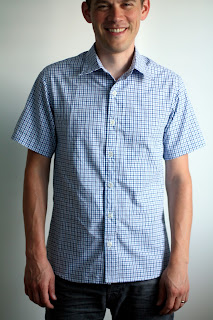 With a whole week devoted to my two little boys recently, I thought I should turn my attention to my well-deserving biggest guy.  Apart from a quilt many (many) years ago, he has only ever received a pair of linen shorts from my sewing room.  Not sure why I've taken so long...perhaps it has to do with the ridiculous lack of men's clothing patterns (that don't involve vests).  If I thought little boy's had it rough in the pattern department, men have it far worse!  Enter Colette Patterns.  With their Negroni camp shirt pattern, there was some salvation that a person could make something fairly stylish for their guy (or for themselves). 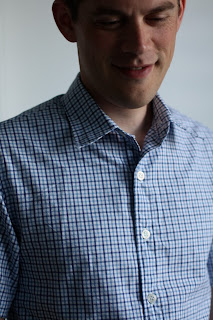 Unfortunately, I'm not even sure I can say I used the Negroni pattern, with the number of alterations and changes I made!  Using the tutorial here, I opted for a real button placket instead of a facing and followed instructions here for a collar stand and collar.  Very simple changes, actually, and both turned out lovely! 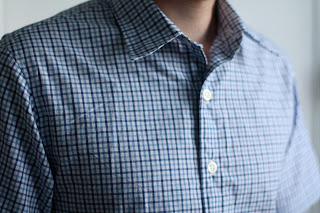 With the shirt becoming less "campy", the width of the sleeves felt huge, especially on my guy.  So I slashed and reduced the sleeve pattern, and shorted it by about 2".  It not only reduced the size of the sleeve, but also angled them down more, which improved the fit under the arm. 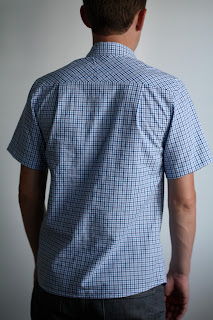 For the back yoke, I cut the fabric on the diagonal for a little visual interest.   I'm definitely loving that feature.  Even though this was technically a wearable muslin, I matched all the plaids and made flat-felled seams on the inside, even the armholes (though I think finishing the armhole with French seams using the tutorial by fellow Britex guess blogger, Jen, and then sewing them down might be better).  I need the practice for the special fabric coming up! 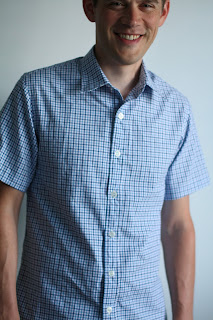 I snapped these photos before he biked off to work, and before I could put a pocket on there!

By the way, did everyone catch "The Great British Sewing Bee"?  I can't believe I almost missed such a sweet and wonderful 4 episode series.  Impressive that they made their men's shirts in under 4 hours!