Since Dee has received the pouch I made for her, now I can show it off!  In our initial emailing, Dee said she liked bright colors, like red and turquoise, and paisley, so I chose a bright paisley fabric from Hart's and used some red silk upholstery fabric from FabMo. 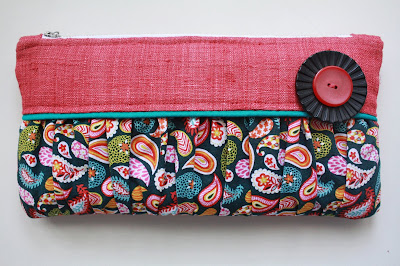 The lining fabric is an over-sized shadow dot (also from Hart's).  It seemed perfect for a someone who likes red and turquoise, no? 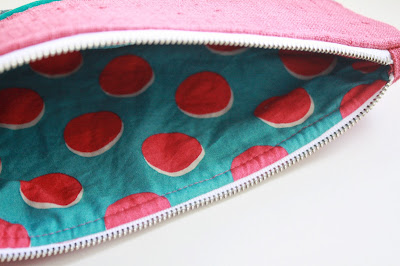 The button detail is actually two buttons, sewn together.  I couldn't believe how well they fit together! 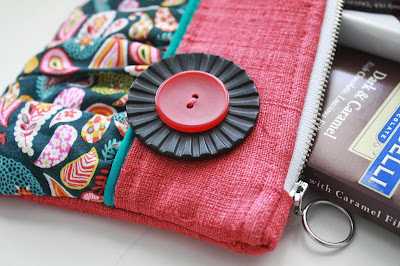 And, of course, the sweets. Since we live in the SF Bay Area, I had to include some local favorites: TCHO and Ghirardelli.  The Justin's Peanut Butter cups aren't from CA (CO instead), but are tasty enough that it doesn't even matter where they're from. 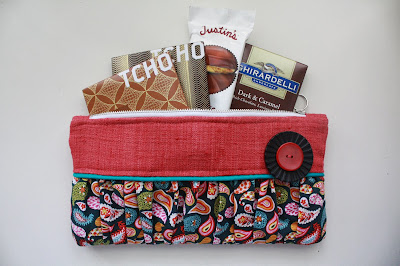 Dee reports that she liked her sweet pouch, which is great, and I was just happy the customs officials let it pass through!  (All I could picture was some guy in his office, chowing down on Dee's chocolates and chucking the pouch in the trash...)  Even though it was a little worrying to be choosing fabrics for someone I don't know too well, it was also loads of fun....hopefully, I can be involved with the official version the next time it's held!  Thanks again, Dee and Samantha!