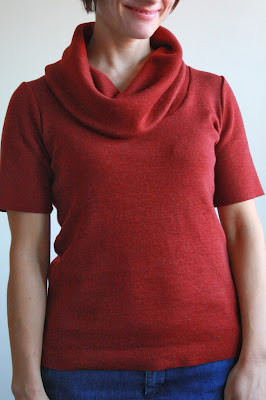 As one of the Community Match winners in the SOSM, I was awarded three Sewaholic patterns.  In my opinion, it was the best prize of all  (among many awesome awards, by the way!) and I was super duper thrilled!  Always the pragmatic, I chose the Renfrew top, Thurlow trousers and the Alma blouse, figuring I could get lots of use out of those, for both work and "play" clothes. Of course, work has been keeping me from my sewing room, so it wasn't until I overbought at a big wool sale at the local fabric store that I was pushed over the edge and I finally couldn't resist anymore.  (By the way, if you're in the South Bay in Nor Cal, Eddie's Quilting Bee has more gorgeous wools, silks, and other apparel fabric than one can take, and it's all 50% off until 11/11.  No I don't work there, just an honest plug for a great selection of fabric :). 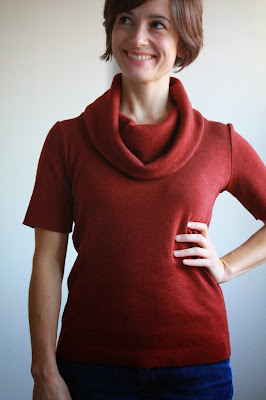 With several wool knits in hand, I chose to start with the Renfrew top and this rust colored double knit wool.  I was a little worried that the collar would be a bit much with this thick of fabric, but I actually kind of love it.  Definitely a statement!  With a fitted wool shirt, I was worried about the itchiness, but this fabric is surprisingly soft and not at all itchy! 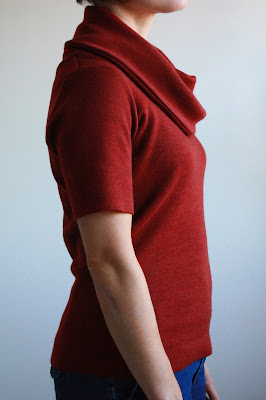 I left the hem and sleeves unhemmed (at least for now) since the fabric doesn't fray at all and I was concerned that folding it under would make it look too bulky. 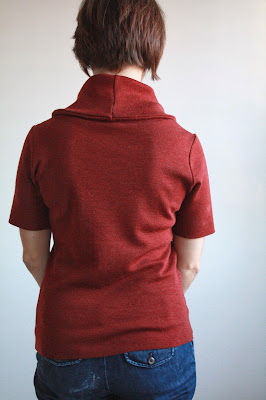 (Ignore the clay on my pants and sleeves!  Ridiculously, I chose to wear this to help with the pottery class at my son's school, where I somehow fell into the role of assisting the kids on the wheel.  Not a bad way to spend the morning, but probably should have photographed the top beforehand!). 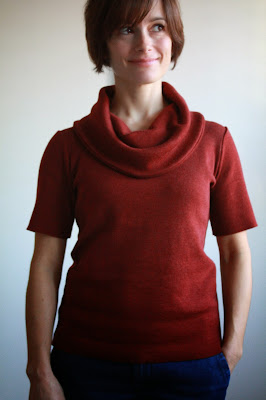 Overall, I was incredibly pleased with this pattern.  I made a size 2 with a petite alteration in the waist, though usually I like my tops a bit more fitted, so I'll try a 0 next time.  With some major strategic planning and clipping about an inch off the length of the cowl, I even managed to cut the pattern from about 1 1/8 yard of fabric.  Next up: a wool dress?  We'll see if I can pull off two garments in a week!