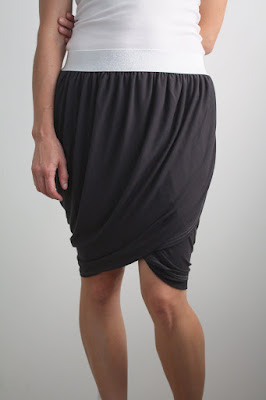 I was relishing the finale of "The Great British Sewing Bee" (season 3) with a bowl of popcorn this evening, when I was surprised and thrilled to see that the contestants' first challenge was to sew the Drape Drape 2 no.2 top that I posted the other day!  It was the exact pattern!  It was so awesome. Even though the only version of the program I can find online in the US is pretty grainy and in a tiny format, I am in love with the show.  Could the contestants be any more kind and sweet?  Nope. And I didn't mind watching Patrick Grant throughout the episodes, either.  Now I'm just sad that it's over :( 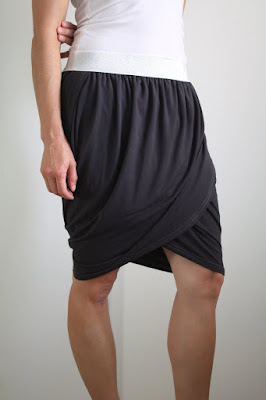 Anyhow, I'm finishing up my informal three-garment tour of Drape Drape 2 with the petal miniskirt, no.5.  This is the garment that pushed me to purchase the book.  I haven't seen many versions on the interwebs, which was slightly concerning to me, but I took on the challenge anyway. 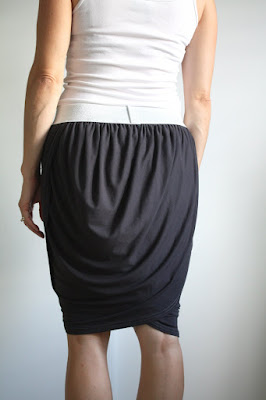 The garment is made from two large semi-circles, which are hemmed and then gathered and sewn to an elastic waistband.  Simple, right? No.  As it turns out, it's super important to actually make the markings and follow the instructions, which I failed to do the first time.  Also, I attempted to attach the skirt to a self-waistband, which just wasn't strong enough for the weight of all that gathered jersey.  Big fails. 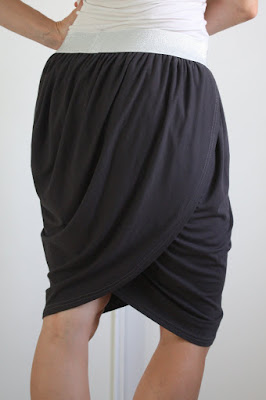 So, I took it apart, removing about 1/2" from the top edge in the process (not a bad thing) and remade it, this time with tailor tacks and the book propped open for easy reference.  I also bit the bullet and bought a wide elastic waistband.  But not just any old elastic.  This one is sparkly silver! 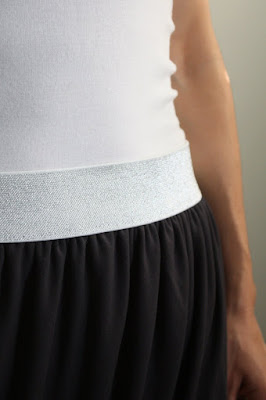 With the skirt properly made, I like it.  It is very comfy and unusual (in a good way, I think!), but I don't love it for a few reasons.  First off, it's heavy.  I should make the waistband smaller, because it gets a bit stretched in the sewing process, and then with the heavy, heavy skirt panels, it s-l-o-w-l-y slides down.  Second, there are two layers of gathers around the whole skirt, so it adds some not-needed bulk in a bad area.  This is a bamboo-lycra, so perhaps a lighter-weight fabric would solve some of those problems. 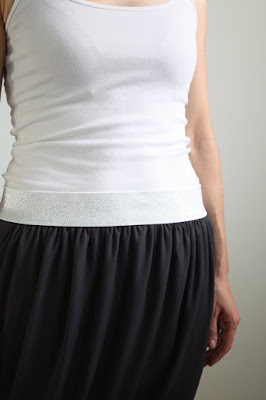 Finally, I have no idea what to wear with it!  I've paired it with a plain white tank here, but I wouldn't leave the house in this outfit (except if I went out with the ladies for drinking+dancing!). The book shows it with top no.4, but that's a whole lot of fabric.  I'm considering venturing into the realm of sequins to make some kind of tank top...but that's pretty low on my sewing queue. 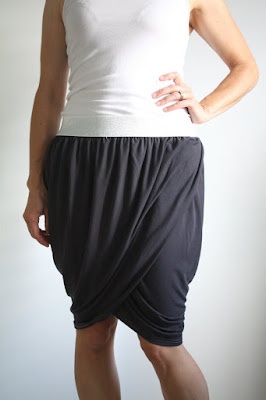 After this foray into draped garment goodness, I purchased Drape Drape and Drape Drape 3.  I couldn't choose, and why should I!?  So exciting!