My son's first cub scout camping trip is this weekend (he's been counting the sleeps for a week!), and as a former girl scout, I pulled out the only pre-camping sewing activity I know--the infamous Sit-upon.  "Sit upon what?", my son asked.  For those of you who don't know, a Sit-upon is a mat to sit on while camping, made out of an old vinyl tablecloth, stuffed with layers of newspaper and whipstitched around the edge (at least when I made one, way back when).  We upgraded slightly with nice Mexican oilcloth (luckily, he's a young, carefree little boy, so he didn't balk at the only print I had on hand!) and a couple layers of fleece fabric for the inside.   I punched holes around the outside of both layers of oilcloth, but he sewed the whole thing himself! 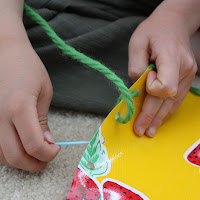 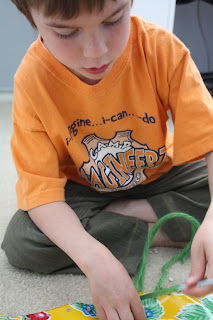 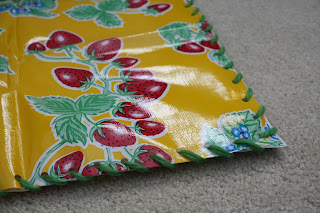 He had so much fun sewing the first round, that he went back and added a second color of yarn going in the other direction. 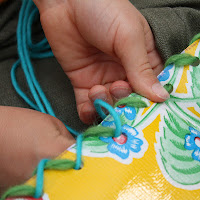 Still excited about sewing after he finished, he spent some time rifling through my fabric bins.  As much as I love the idea of my little guy sewing, I had to overrule him when he pulled out some vintage wool plaid exclaiming that he wanted to make two pairs of socks!  With the summer break coming up fast, I'll definitely have to plan many more kid-friendly sewing projects. 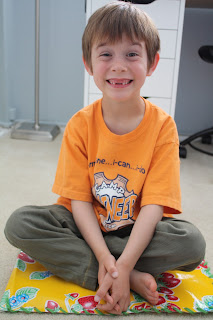 Ready to sit on some wet ground!