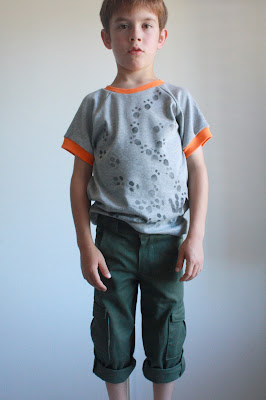 I'll preface this post by saying that these may be the last two garments I sew for this particular child of mine. Granted, it's the end of a 10 week summer break, but the amount of grief I was given when asking said child to try on the clothes I had painstakingly made for him has convinced me to stick to selfish sewing for a while!  That face above?  That disdain is for real. 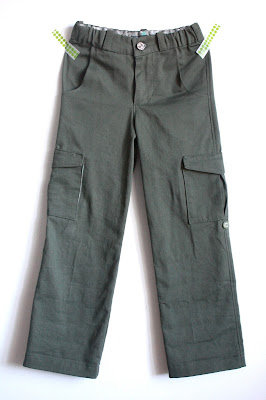 On to the garments!  I am super pleased with how these Coastal Cargos turned out!  Style-wise, sewing for an 8 year old is tricky; you definitely don't want their stuff to scream "my mom makes my clothes!", so essentially I was aiming to make something you could buy at the store.  My son and I picked out the fabric together (Joann's), with some negotiation, of course.  We weren't going for the 'military fatigues' look, but there was a serious lack of better options at the store and he wouldn't even consider the rust colored version I had in mind. 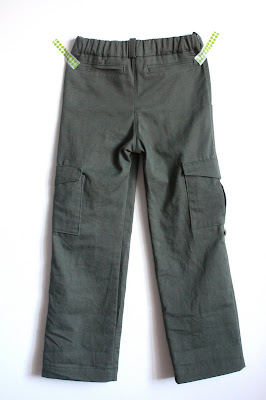 My son is super skinny, so I used size 6 for this pattern.  Most patterns have excess ease (and my French seams probably used more seam than they were allowed), so these pants fit him well right at this very moment, with little room to grow, unfortunately.  But hey, at least I have a younger son! 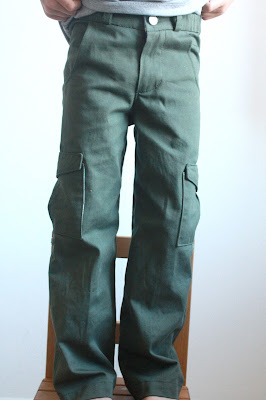 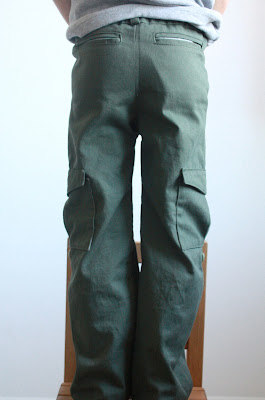 Melissa's directions were great and I loved all the details in the pants (Three different types of pockets, button tab for rolling up the pants, zip fly, belt loops...these pants have it all!) 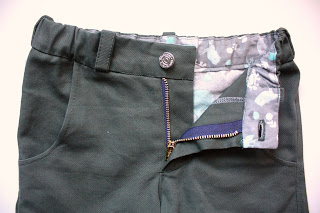 In lieu of bias tape on the leg seams, I went with French seams, that I sewed down (topstitched).  Flat-felled seams were my original plan, but the FS seemed like it would be easier, and less finger-burn inducing.
It's unlikely that my son will actually use this feature, but the pants roll up and are secured with a button tab!  It'd be great for wading in the ocean...like this weekend while I'm fabric shopping at Hart's.... 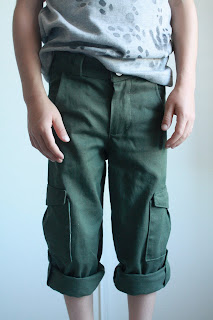 At the last minute, I wanted to make a t-shirt to go with his new pants, so I downloaded the Recess Raglan Shirt, by See Kate Sew.  It's a great little pattern, and between my two boys will be useful for years, but the size 6 was pretty big all around for my guy.  Next time I'll size down and probably make the sleeves a little slimmer.  I started off with the elbow length, but they just looked comically large on my skinny guy, so I cut them back to short sleeves. 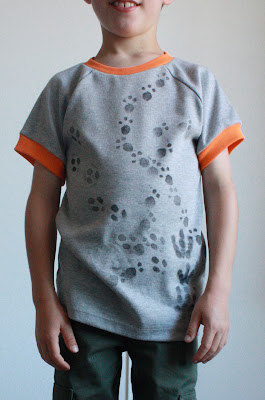 This morning, we carved potato stamps to look like animal prints and he used them to decorated his new top.  The boy loves his animals! 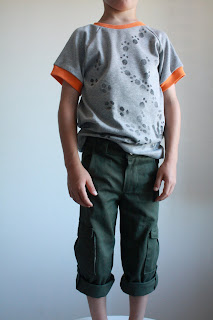 Pretty adventuresome looking outfit there!  He just needs his Adventure Bag and he's ready to go...back to school :)

P.S. The Coastal Cargos Sewalong is going on right now--you still have time to join in!