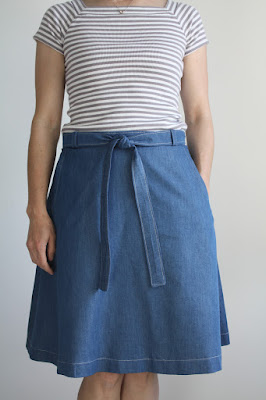 And by 50, I mean 3...I was a lazy, lazy sewer and didn't change out my bobbin when I realized that it was not the same as my thread, and then when I ran out of the thread, I didn't have the same color--so yeah, three shades of gray thread were used and you can see ALL of them as topstitching in various locations.  I suck, but I've already worn the skirt so I clearly don't care too much about it! 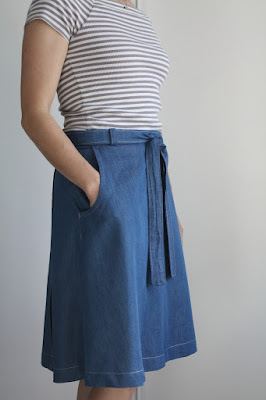 I've used this pattern (vintage Butterick 4309) once before, and I wear that skirt quite frequently.  It is a bit heavier, so it can span 3 out of 4 seasons here in NorCal.  For this version, however, I wanted to make something more versatile, in a lighter weight fabric for the summer.  And after learning so much about fibers and fabrics in my current Fabric Analysis class at WVC, I ended up being wooed by a chambray Tencel (darn, sold out!) from Mood.  I've definitely never worked with Tencel before, and I don't do manufactured fibers very often, but this was a pretty easy-to-handle substrate.  It was a bit lighter than I expected, and not as wrinkle-resistant as this fabric is generally know for, but I think it makes a good wrap skirt. I can see some faint pilling on the inside already, so I don't know what to make of that.  I'm skeptical about manufactured fibers, so I'll be critically evaluating the longevity of this one for sure. 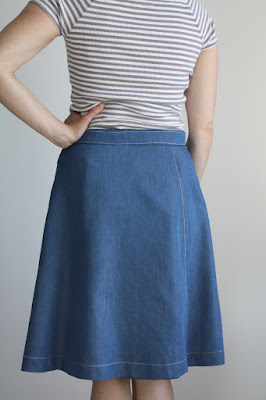 So on a normal day, this skirt would have taken 2 hours, tops, to sew, but I spent at least that long just adjusting the fit.  For a wrap skirt, that's just dumb!  The pockets weren't laying right, so I had to rip them out and redo them multiple times.  I'm not sure the pattern was drafted to account for the fact that the skirt will actually wrap around a body, so I'll make some adjustments in the future. 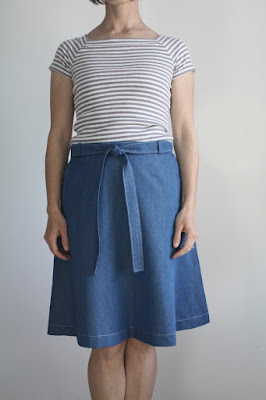 Oh, I also lost the waistband pattern piece, so I had to redraft.  I opted for a slightly narrower waistband for both stylistic and fabric conservation reasons. 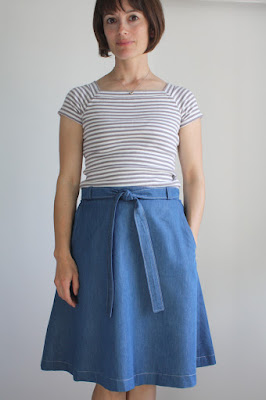 I've got so many projects in the works, now that I'm done teaching for a while.   I'm excited to be able to spend more time at my machines, and I've got an actual spreadsheet of all the projects I have to complete.  Now if only I can stick to my proposed deadlines!

Katie of The Creative Counselor is planning a Back 2 Basics week in the second half of April.  This skirt is a workhorse-type of basic in my wardrobe, so I'm getting a bit of a jump on the it all!