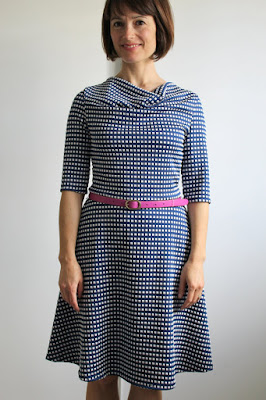 I have a thing, apparently.  If I like a pattern, I make it at least twice, in quick succession.  There are many examples, but this is the most recent instance; the Bronx cowl dress (see first version, here). 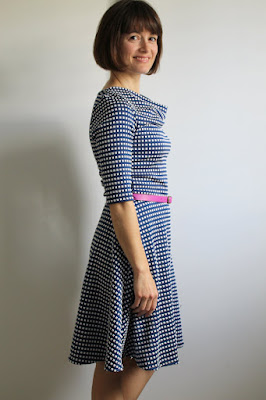 Clearly, I love this pattern.  More specifically, I love this silhouette and look for me.  A fit and flare dress just works with my every day life.  And again, for those that think dresses are fussy, count the number of garments I have to coordinate and put on my body.  Yup, that number is 1.  Easy-peasy. 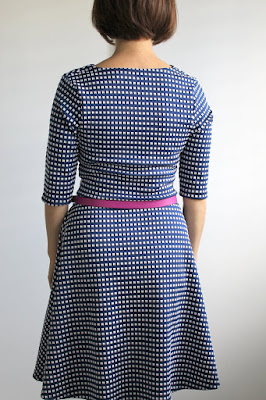 Let's talk about the fabric, though; it is the true star of this garment (at least that's my impression based on the number of approving comments I received when I wore it!)  I purchased it last month with an allowance from Britex Fabrics and unfortunately, it's not available anymore.  I normally wouldn't pick a polyester knit, but I just adored the raised square texture!   The fabric is on the thick side--not quite a scuba knit, but with a good heft.  I don't think I'll enjoy the poly knit in the blazing heat of the summer, but it was very comfortable for our early spring temps. 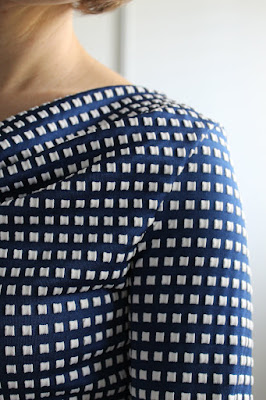 Here's a close up of the tiny raised squares.  It's really fabulous! 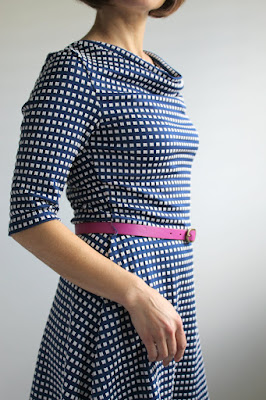 Knowing that the fabric was a little thicker than my last version, I expanded the cowl a bit to help it drape better.  To do this, I slashed the pattern horizontally across the bodice at the bustline.  Then, I cut the remaining upper part vertically and expanded the cowl arc.  This expands the cowl while leaving the bust and waist measurements the same. 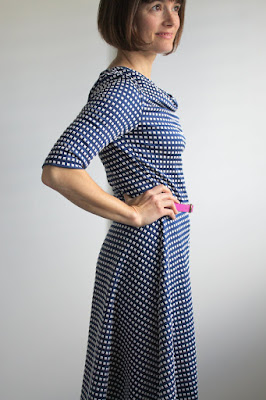 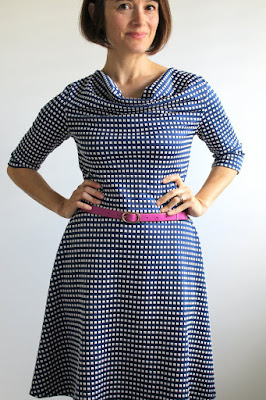 I did want to break up the fabric print with  belt, so I added some belt loops at the side seams.  I just ran my serger while pulling the 4 threads to create a "chain" and then attached them to the dress on the inside.  If I don't feel like wearing a belt, I can pull the belt loops inside the dress to make them less visible from the outside. 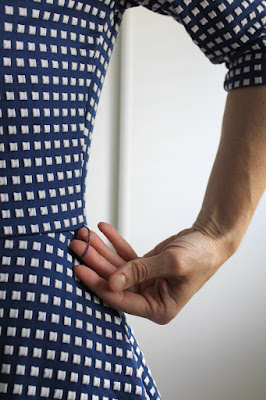 I suspect I have a couple more of these dresses in my future, though perhaps using the scoop neckline and short sleeve variation for the summer. 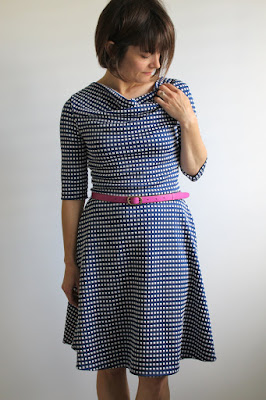 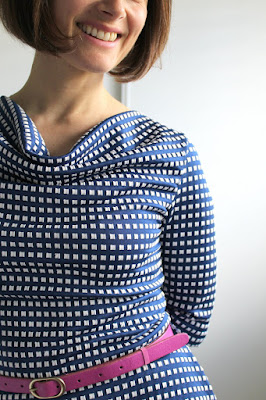 I'm also realizing that my last bunch of posts have all been navy garments (and there is one more, I'm afraid!)  Navy is the new black :)