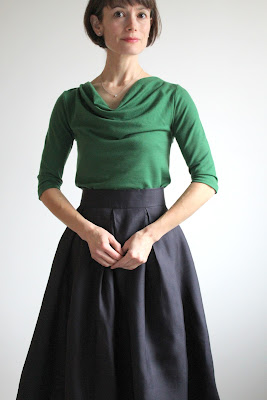 Back in Paris, I had the opportunity to visit a special Balenciaga exhibit at musée Bourdelle.  The theme was black: the garments were primarily black, usually displayed in black boxes, and some were even behind black curtains that you had to lift to view the dresses.  The pieces were stunning, naturally, but what was particularly intriguing to me was that many of them were made of silk gazar (a fabric invented by Balenciaga).  Despite taking two Fabric analysis course and have decades of sewing and touching fabric experience, I had never even heard of silk gazar.  The instructor in Paris described the fabric as being "silent".  Whether that was a translational issue or truly the fabric made no noise when the wearer moved, I didn't know at the time, but I felt compelled to find out. 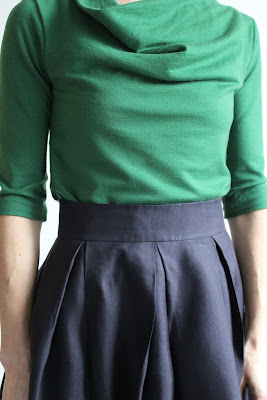 A quick search at Mood revealed some options and I chose this deep navy blue silk gazar.  The fabric reminds me entirely of fine linen with it's crispness and hand, though it doesn't wrinkle quite as badly.  It was slightly translucent, but the structure and body of the fabric was lovely.  Apparently, it softens considerably when washed, but I wanted to keep the stiffness for my garment. 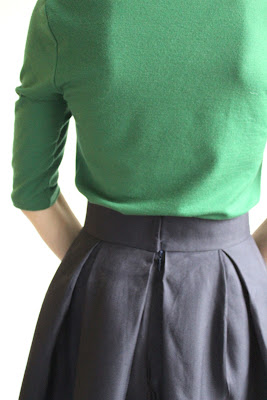 Originally, I had planned this outfit for Christmas, but when that didn't happen, I hoped to sew it for my husband and my anniversary on the 28th of December, which also didn't pan out.  I ended up sewing the skirt the day before New Year's Eve (and the top on NYE) for that night out and then for my brother's wedding a few days later. 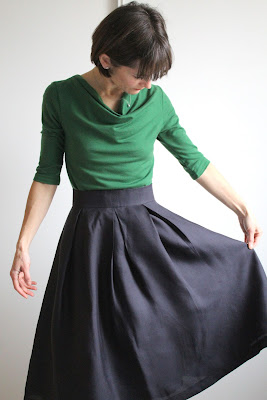 I went with this simple box-pleated middy-length skirt from Just Patterns.  I sewed a size 36, but I should have cut a size 34 (or maybe smaller).  I ended up omitting the pockets when I had to resew the side seams (poor decision, especially when I had to carry tissues at the wedding!).  Since the fabric was a bit see-through and lightweight for the winter,  I made a simple straight lining (with some tucks at the waistband)  with what I had around that matched, which was a 4-ply silk I've had for a while.  Kind of a decadent lining, but it worked perfectly well.   The pattern was well-drafted and for only $3 for the digital copy, it's a complete steal. 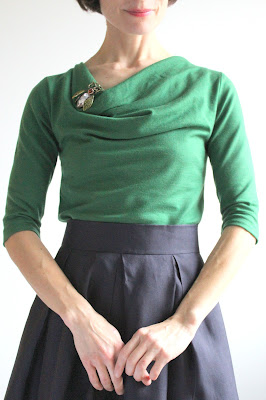 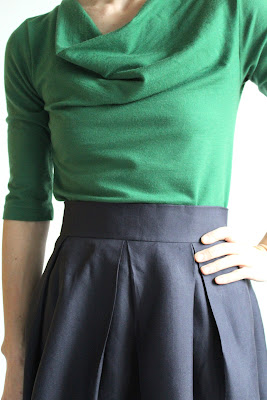 For the blouse, I've recently become a bit obsessed with the color emerald (you know, 5 years after it was the "Pantone color of the year" :) and found the lovely stretch wool jersey.  The fabric was ideal for a drapey top, so I used the draped bodice of the Bronx dress pattern by SBCC, extending the length to hip-level.  I should have made the top a bit more form-fitting, but it works well enough. 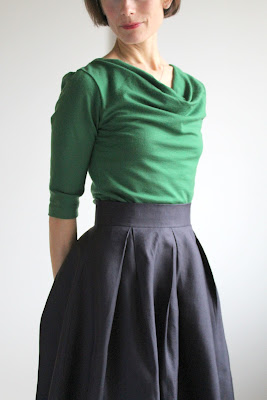 I'm pretty much ecstatic about this outfit.  It feels fun and fancy (especially the length of the skirt with some kitten-heel booties), but not too frilly, and the colors are so festive.  One issue though, I can't do a whole lot of eating while wearing the skirt--that waistband is *quite* fitted. 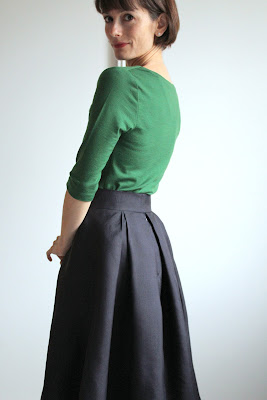 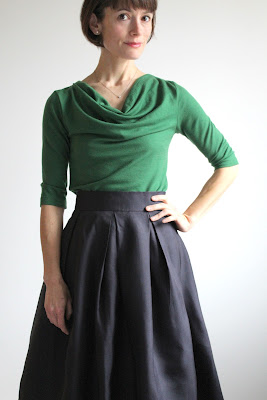 Oh!  In case you've read all this way to find out if silk gazar is silent....well, it's definitely quieter than you'd expect for a fabric this crisp, but I'm not sure I'd call it silent.  It's still pretty rad, though, and I'd happily work with it again! 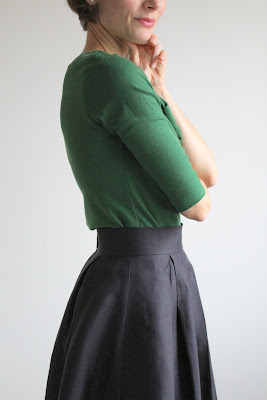