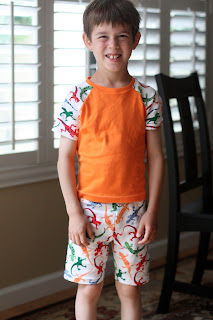 Two days, two sets of pajamas!  First up, shorties for my big boy, in the "babyish" lizard print.  Having bought only one yard, I didn't have quite enough to make a second shirt AND shorts, so I used the orange rib for the body of a raglan top and the lizard fabric for the arms.  I like the look a lot, since it breaks up all those crazy-colored lizards.  I used a RTW shirt to rough draft the pattern for the top and used a short-length version of the "Sleeping Johns" from Growing Up Sew Liberated for the bottoms. 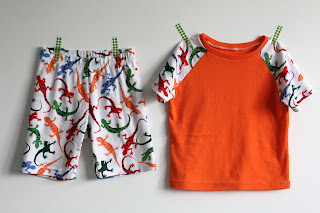 The shorts fit him perfectly, but the top is a bit short.  No big deal--he's got a younger brother, so it'll get use regardless :).  And he loves them.  The photo of him at the top of the post was in the morning, after a night of sleeping in his new jammies. 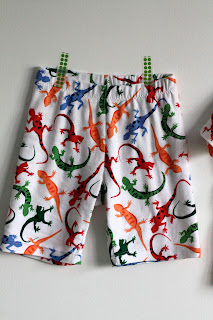 I discovered the most perfect elastic ever.  Seriously.  If you make elasticized bottoms, buy this elastic.  It's nicely stretchy, and sewing through it doesn't make the elastic all wonky.  Beautiful stuff for pajamas (and hopefully pants, too!) 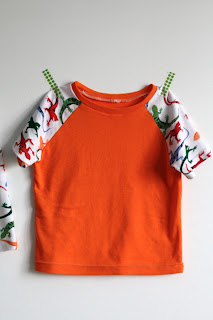 As usual, I used a 3-thread overcast for the main seams and double-needle with wooly nylon in the bobbin for the hems. 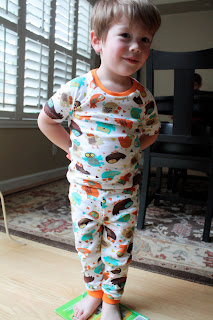 Little man got a pair of PJs too!  His are in a colorful owl print, with the ubiquitous orange rib knit for the trim. 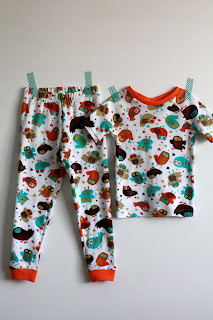 I scaled down his brother's raglan shirt pattern and used size 3T of the "Sleeping Johns" pattern for the bottoms.  Wow, I love that pattern!  With only two pieces, it's super easy and fast; I timed this pair, and they took 30 minutes (including tracing and cutting out the pattern, measuring ankle ribbing and visiting my son's "pet store" to buy a stuffed dog). 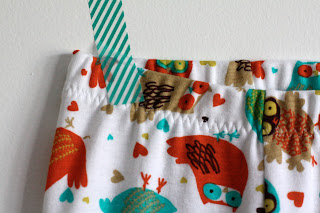 I altered the pattern by cutting off an inch or two and adding a rib knit cuff at the bottom so I could make them long and not cause problems when he's walking around.  Plus, that's what all the rest of his store-bought pairs have! 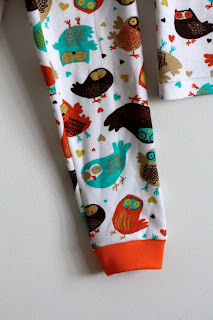 I attached the ribbing before sewing the inseam, which worked great.  Really, I can't say enough about this pattern.  Unfortunately, much like when I made my first PUL diaper cover, I've realized that I can probably no longer purchase pajamas when they are so incredibly easy, fast and cheap to make. 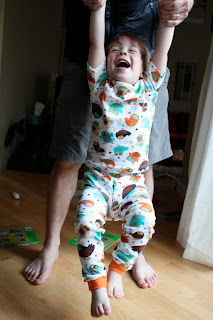 It took some cajoling to get a photo, but swinging with Daddy helped :) For the rest of the week, I have two projects planned:
I'm getting antsy to get back to selfish sewing...I have some patterns and knit fabric of my own waiting patiently...