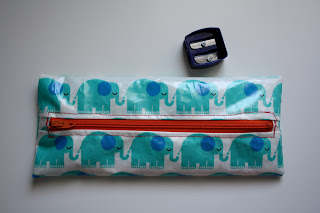 I'm in!  Kid's Clothes Week starts tomorrow.  It's like a mini-resolution: sew for 1 hour a day for a week, focusing on the kiddos.  I've intended to get into the sewing habit pretty much forever, so now's as good a time as any, especially since I don't have lecture prep taking up my evenings anymore.

Last week, my younger son had a special package hand-delivered from Japan--a big box of worksheets and activities (which the company would not ship to an American name!) for use at his daycare.  Included in the package was a set of adorable pencils, not round by "sankaku" (triangle).  The daycare requested a pencil case, and of course, I was thrilled to have a simple and cute project to work on.  I was set on sewing my son's name onto the case, one letter per elephant, which made it comically large for the pencils it was to hold: 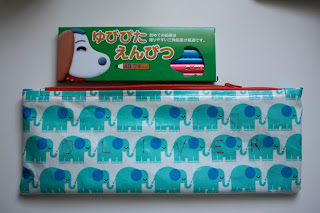 Clearly, a second pencil case was needed.  For the next, I pitched the idea of sewing his name on it and just made an appropriately sized bag. 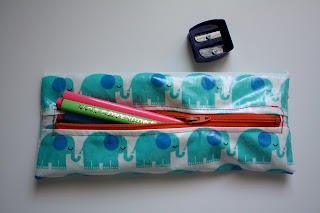 Much better!   For comparison, we have the two together.  The bigger bag will certainly get use--all of our writing and drawing implements are segregated in their own oilcloth-zippered bags, and they're also fabulous for plane rides and other trips. 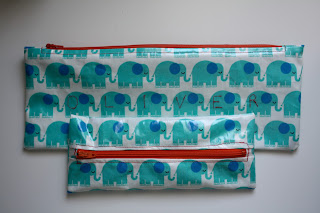 For KCW proper, here's what I have on the docket: