I'm going to preface this post by divulging that I have been home without children for the entire day.  Compound that with not having to deal with fit issues (yay for kid's clothing!) and I was a very productive seamstress today...as should be expected under the aforementioned circumstances, right? 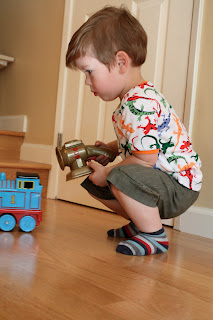 On to the daily report!  First up, I wanted to make a pair of pants for my super skinny big boy.  I had purchased the Dapper Dillinger pattern (Figgy's patterns) a while back, not realizing that the pant is designed to be super baggy (on a regularly-sized child).  So I scaled the back piece to about the 3T waist size and kept the length for his actual size (about a 6).  Hadn't hemmed them for this photo, but they are all done now! 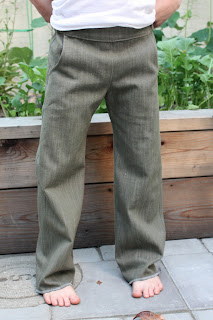 I also decreased the waistband width and added some back patch pockets. Pants just don't look right without back pockets!  I had to remove and reattach these after I began sewing the waistband and realized that the pockets would hit into where the waistband would be sewn!  Helps to read the instructions all the way through, apparently! 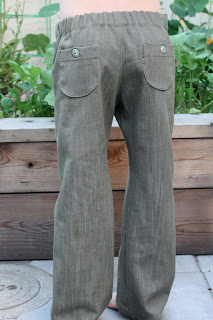 Embarrassingly, I sent my younger son to daycare in PJ shorts because it's about 80 degrees today and we had no clean pairs.  To redeem myself, I made him a pair of shorts (from the same material as his brother's pants, of course :)  I used a pair of pants to estimate the shape and sketched a basic pattern such that each leg of the pant is a single piece of fabric. 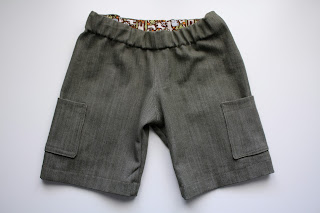 I had to add side pockets because, even at 2.5 years old, he actually uses his pockets and it's the cutest thing. 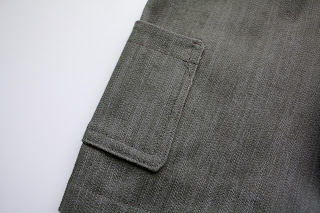 Some double-stitching (with a single needle) for detail.  Love this contrasting fabric (also on the inside of the pockets of the pants, above): 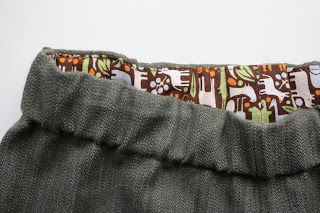 Finally, to round out the afternoon, I busted out a t-shirt.  Using a RTW top for the pattern, I serged it up in no time.  I still don't have an elegant way to deal with some of the issues of sewing with a serger, but pulling out the hand needle to tuck and hide threads works well for now!  I finally got to try out clear elastic to reinforce the shoulder seams and it worked great! 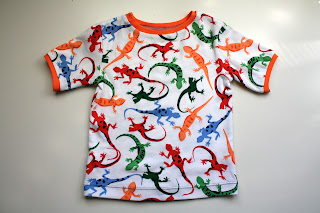 After much cajoling, here are the two boys in their mom-made duds: 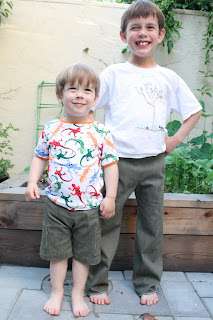 After telling the eldest to lift his shirt so I could get a photo of the waistband, little brother wanted to copy.  Too cute! 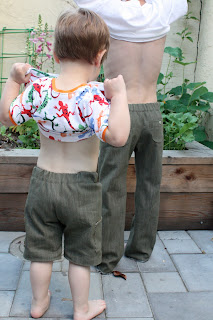 Incredibly, even without the kids around to check sizing, everything fit super well!  Little man's shorts could be bigger in the bum to accommodate his cloth diaper, but *finger's crossed* he'll be out of those sooner than later. 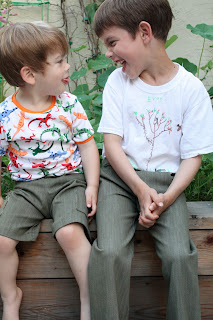 My older son loves animals and I could tell he wanted a lizard shirt like his brother.  After some discussion, it came out that he thinks the print is a little "babyish", but he's thrilled to get lizard PJs instead.  Looks like I have my next project for the week!